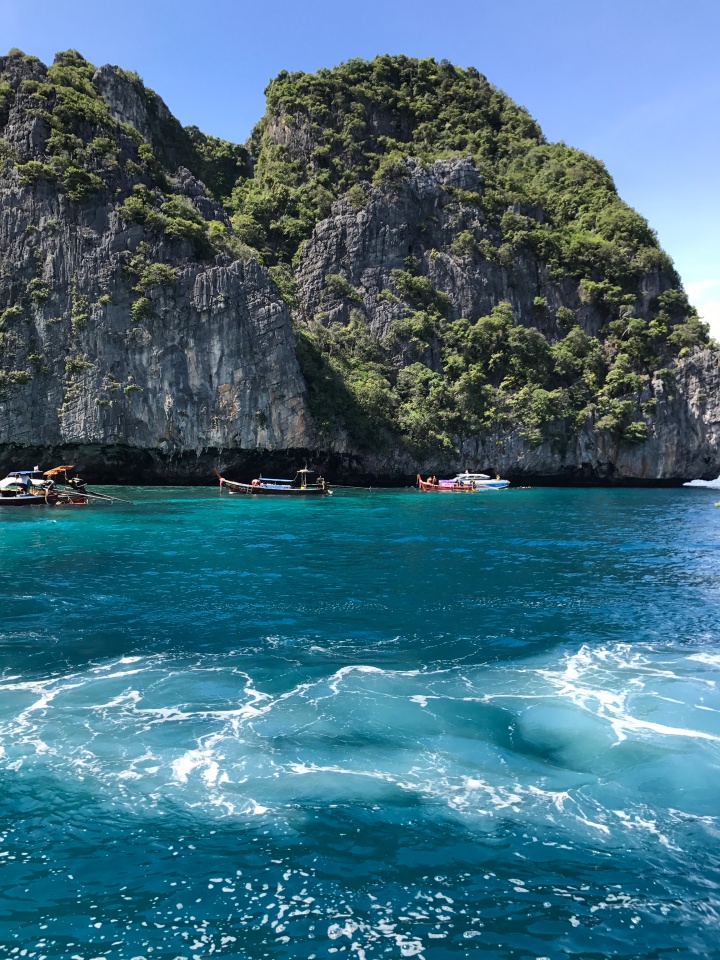 Part One of my Phuket post was all about the softer more relaxing side of Phuket . If you haven’t already, I would encourage you to read that portion entitled Finding Peace in Phuket. This portion of my Phuket blog, Perusing Phuket, will be dedicated to island hopping and night life which let’s be honest, that’s what you came here for, right? Without further ado, here are the details about our time living it up in Phuket.

Phuket is a great place to go if you’re into letting your hair down. As I mentioned before, we made it to Thailand just after the month long mourning period of Thailand’s Beloved King. We were advised that things would be a lot more calm than usual, due to the country being in a state of mourning. However, there was no shortage of activities to partake in. 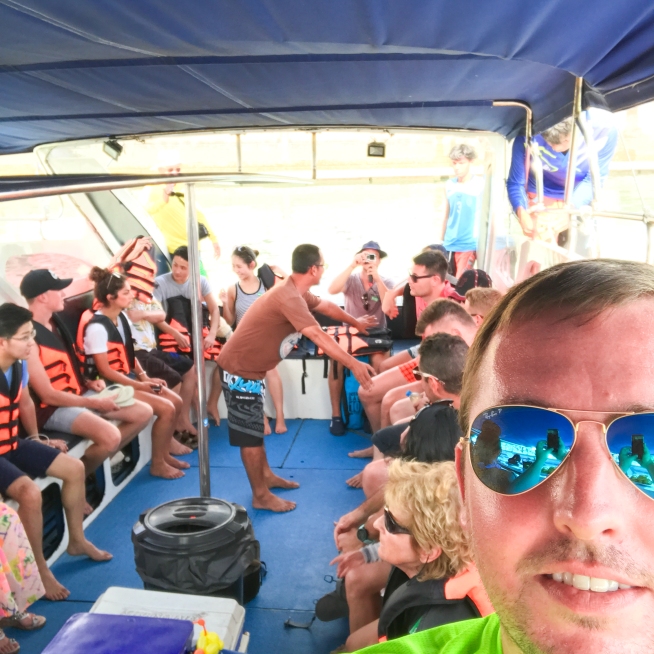 Following  a day full of relaxation, we set out on our island hopping excursion via speed boat to the Phi Phi Island through a company called Tour East. Tour East offers a number of excursions throughout the country. To find out more about them and the tours they offer, search for them on Expedia. Our tour consisted of roughly 25 people plus the boat crew. Ryan paid a little extra for us to have the only VIP service on the boat which meant raised assign seats at the front of the boat so that we could see all of the action and a little extra staff attention. Well worth it! Once the boat was loaded, the safety measures were explained, and followed by Ryan and my confusion as to why bananas were on the boat (urban legends says they’re bad luck to have on a boat) we set out on our voyage to the the Phi Phi Islands. 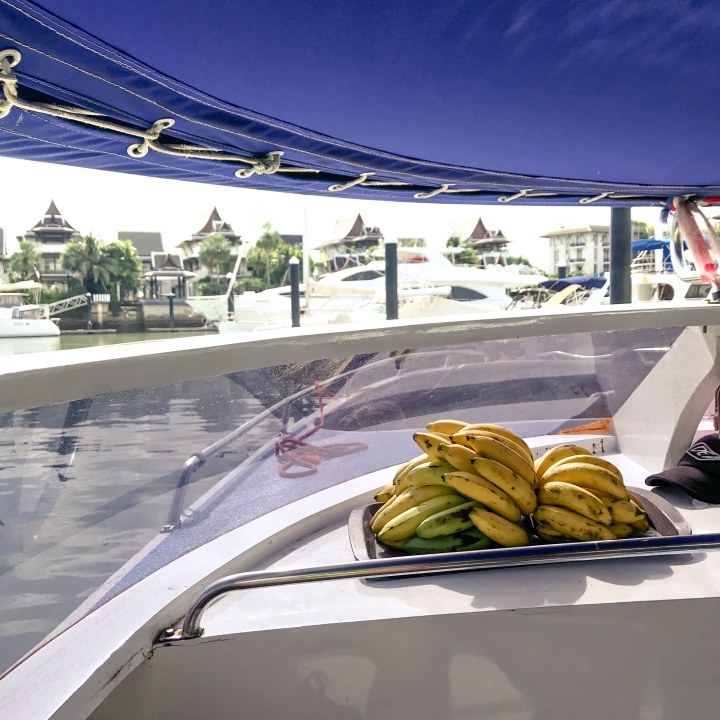 The Phi Phi Islands consist of 6 islands. The most notable are Phi Phi Don and Phi Phi Leh. You may recognize Maya Beach in Krabi, which became overwhelmingly popular to the western world after Leonardo DiCaprio’s, The Beach, was filmed there in the early 2000s. Unfortunately, Maya Beach has recently been closed indefinitely in an effort to save and restore the beach from any further damage as it has seen its fair share of tourism which has wreaked havoc on the ecosystem. 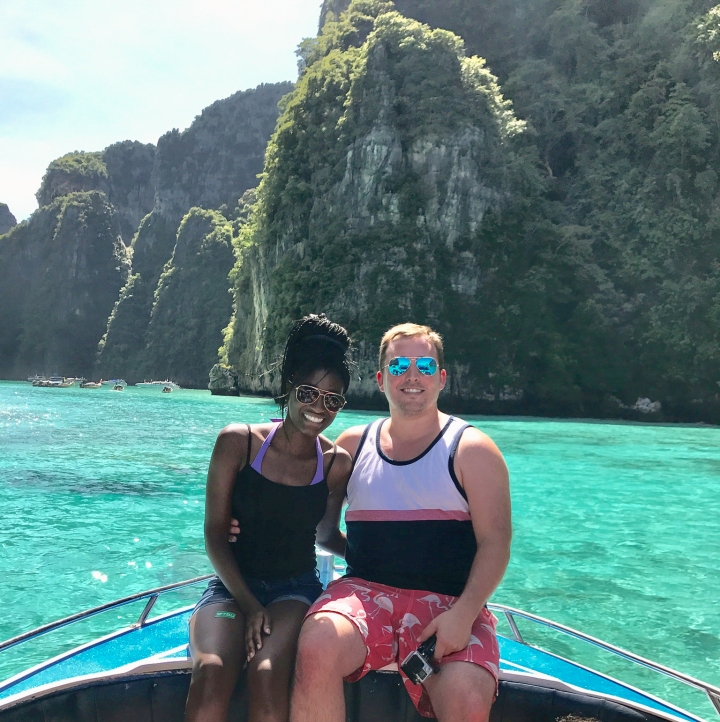 After about roughly a 45 minute ride and seeing some of the bluest, purest water quite possibly known to mankind, we made a quick stop at our first location where the bananas were tossed off the boat to the island’s locals which just happened to be monkeys. They were more than happy to swim out to grab a snack. We however, were not allowed off the boat. I have heard on several occasions to beware of monkeys in Thailand and was perfectly fine heeding to that warning.

We were then taken to a smaller uninhabited island where everyone was allowed to depart the boat and spend some time enjoying the sun, sand, and swimming. Unfortunately, I did not capture any moments from that part of the excursion, but it can be found in Ryan’s Phuket video which is linked in the side bar.

From there, we were off to Maya Beach. 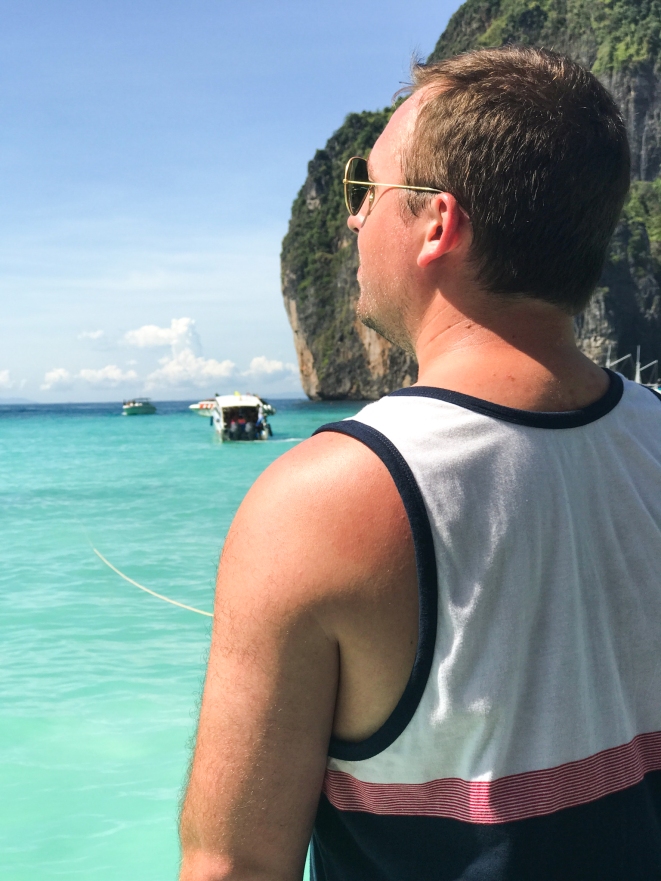 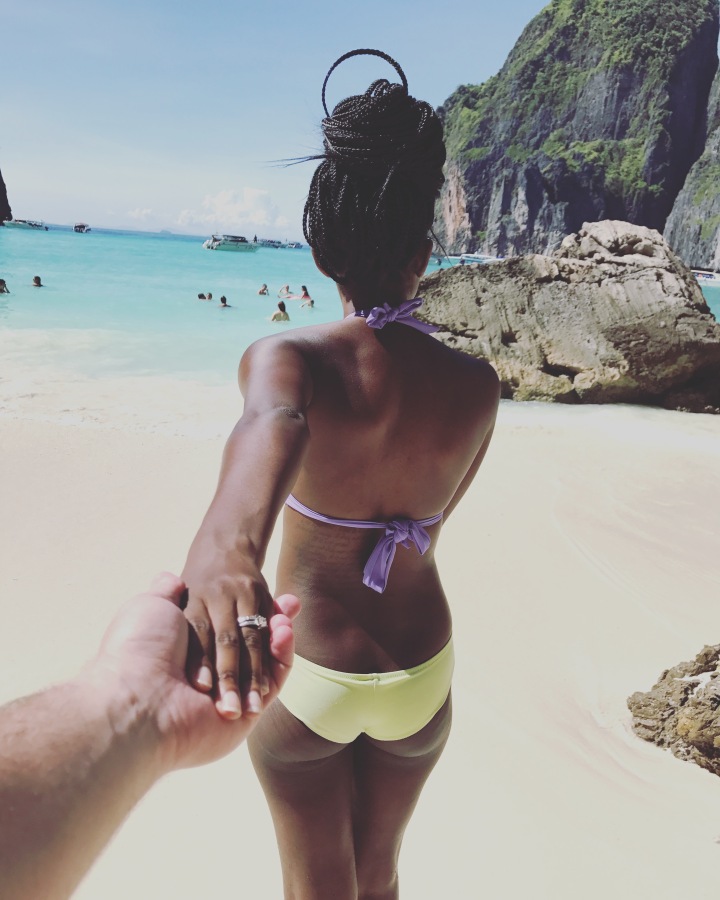 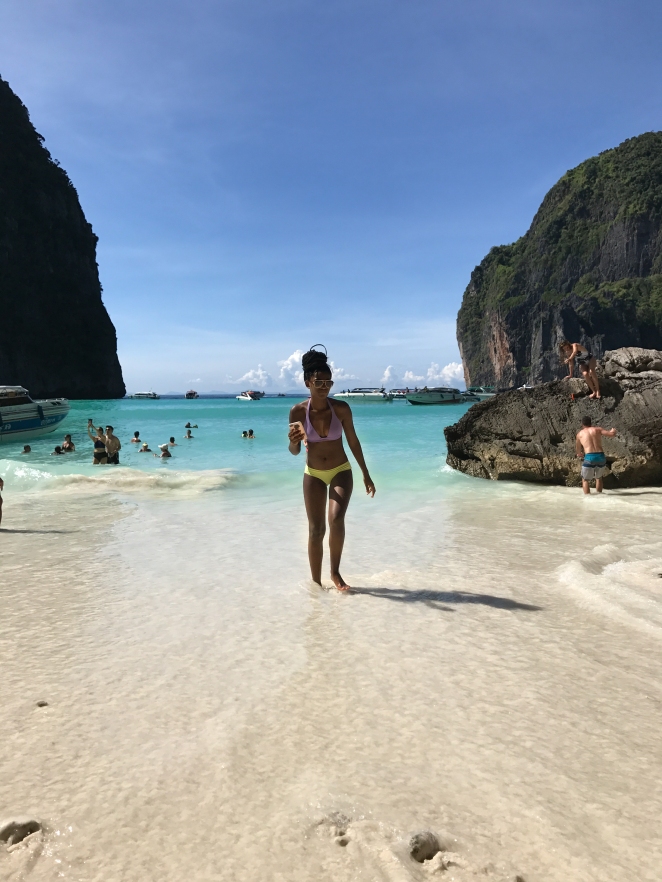 If you’re looking for a silent uncrowded beach, this is not the place for you. Motorboats constantly pulled in and out of the cove and the beach was easily filled with hundreds of tourists at a time. It however is a site to see with its sugary sand and pristine water, what is not to love? And even more so, my pre-teen self was screaming inside that I had stepped foot in a location that Leonardo DiCaprio had once stood in. 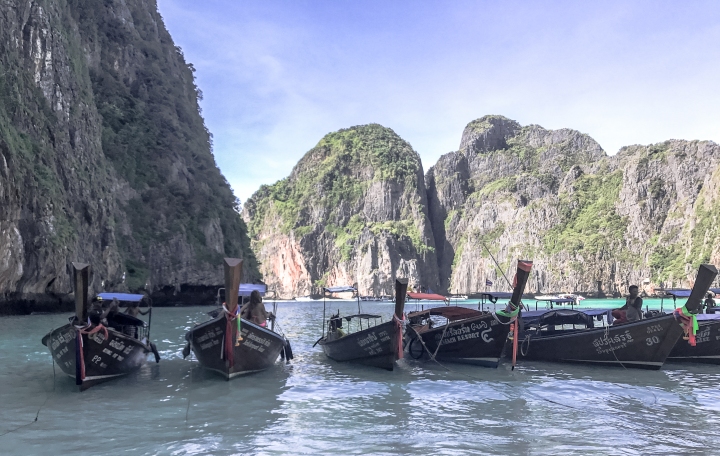 I’ll have to admit that if I had a second opportunity to visit Maya Beach or any of the Phi Phi Islands I would opt to experience it on a traditional long boat. It provides for a more intimate setting and is a little more true to the culture.

To finish off our boating excursion, we hopped over  Koh Phi Phi Leh wrapping it up with a snorkeling session and a catered lunch at a restaurant on the beach. If you like snorkeling, this is a perfect opportunity for you. I, on the other hand, wanted to be a good sport and at least try it, but my ichthyophobia (fear of fish) got the best of me after about 10 minutes in the water, feeling fish rub against my legs, panicking, and kicking a piece coral in my sudden onset anxiety, and having to find my way back to the boat as my goggles filled with water. Ryan on the opposite hand, lived it up. Shortly after lunch we were taken back to the marina where we shuttled back to our hotel.

Later that night we ventured down to Patong for a little bit of night life. We wandered the streets looking for a place to eat dinner, and stumbled across the Tiger Inn Restaurant. Between the insane number of unique life size tiger statues mounted on the walls, the live band playing classics like Sweet Home Alabama,  and red dim lights, it is easy to find yourself captivated and rushing in to have a seat and dine. Furthermore, this gave me the opportunity to order fried rice served in a pineapple. When in Thailand, why not? 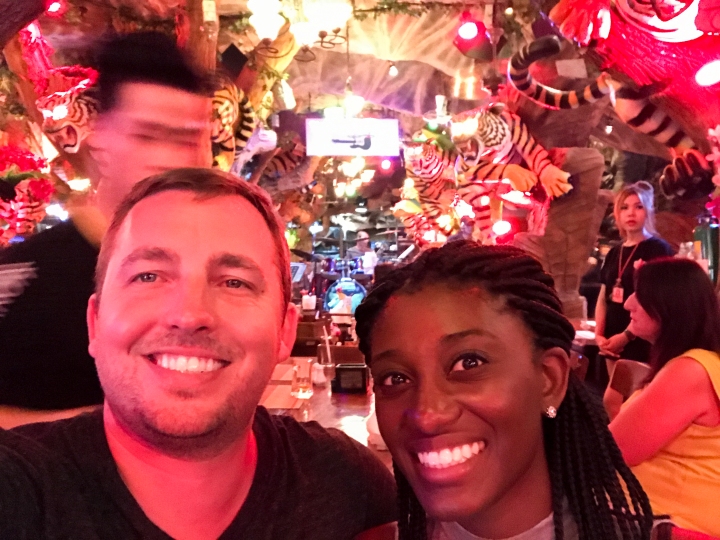 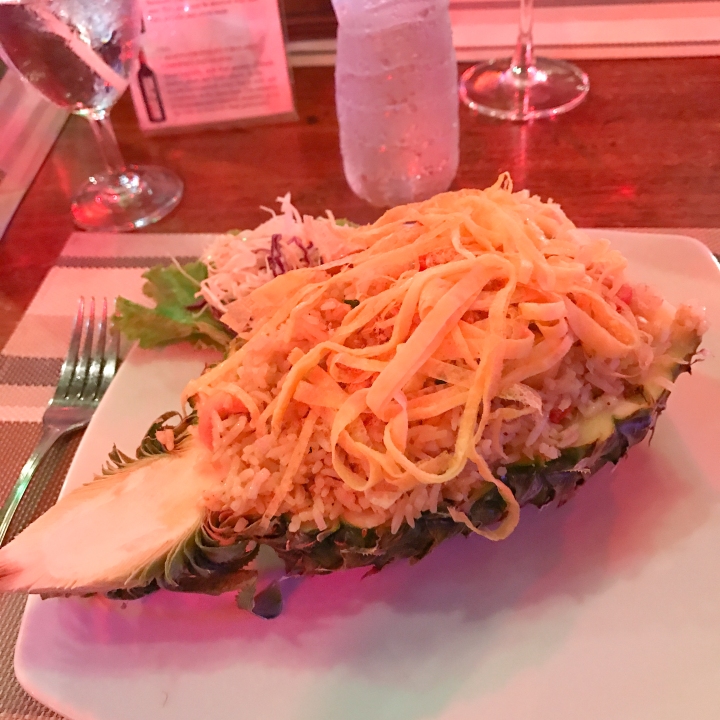 By the time we left the restaurant and had peeked at a few vendor stalls which are innumerable, Ryan had worked up an appetite for ice cream. In his words, “there’s always room for ice cream.” We passed by an ice cream cart on the side of the road where we got our first taste of rolled ice cream and a show… mango and strawberry, the perfect combination for paradise. 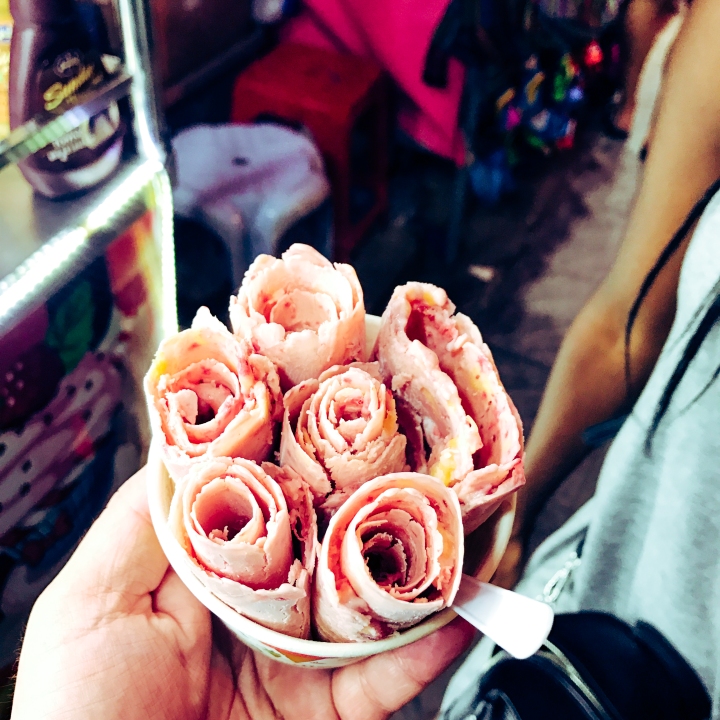 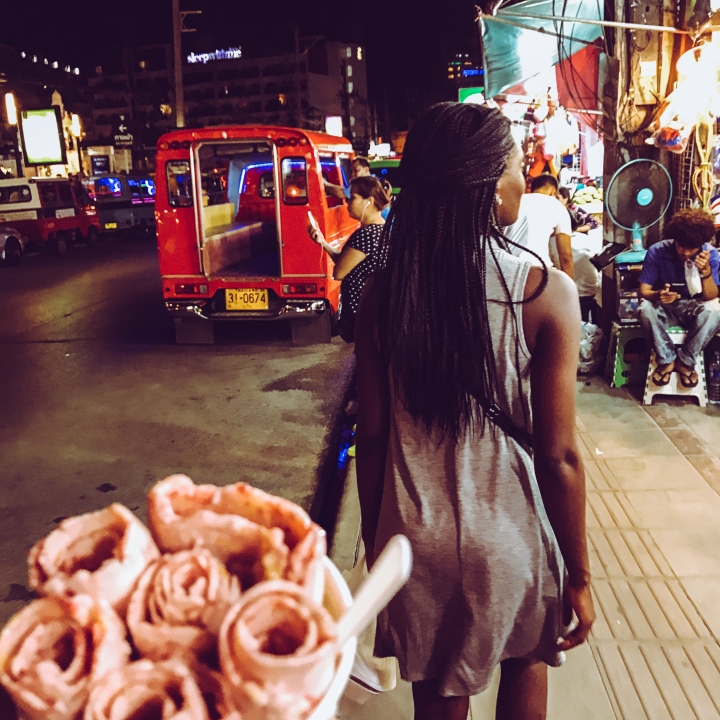 Although Patong is a party goer’s haven, we had kind of lost our craving to go out and party hard after spending over a year in the Middle East. Don’t get me wrong we love a good time and while fun can be subjective, between the numerous bars and clubs in Patong you’ll easily find the perfect nightlife spot for yourself. But beware of the unending invitations to go watch a “Ping Pong Show.” If I had a $1 for every time I was asked and declined the undesired offer, I would be a very wealthy woman. If your not sure what a Ping Pong Show is, I will not be the one to divulge the details, but just know that it is NSFW.

If you’re more of a low key thrill seeker like us, fear not because Old Town Phuket may be more of your speed. We ventured down to the old city the following day and we were not disappointed. Old Town Phuket was once known for its tin mining. Remnants of those times remain, but I found myself intrigued by the amount of street art, the combination of Portuguese and Colonial style homes that lined the streets, and the mix of true authentic Thailand. We have grown to love street art as it is one of the purest expressions of self, life, passion, and it is universally understood. I could have easily spent hours on the hunt for more. 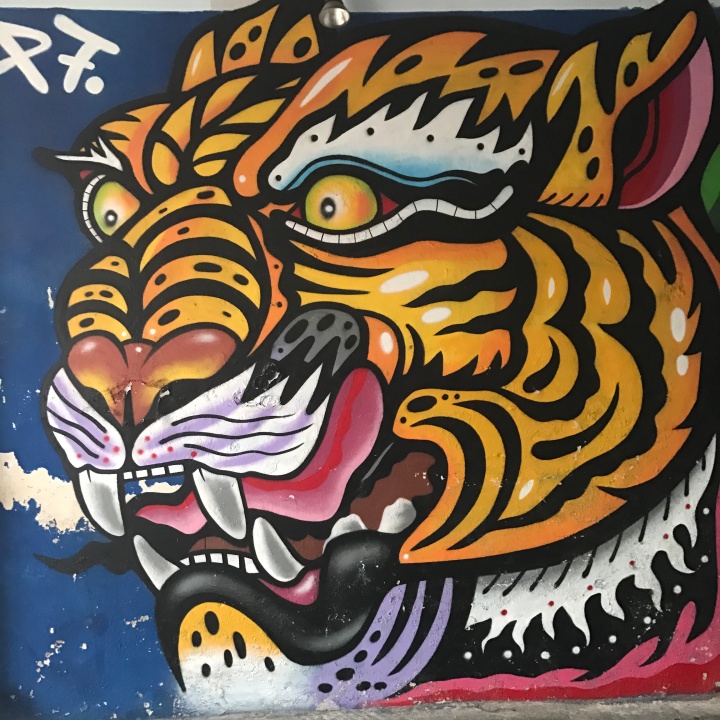 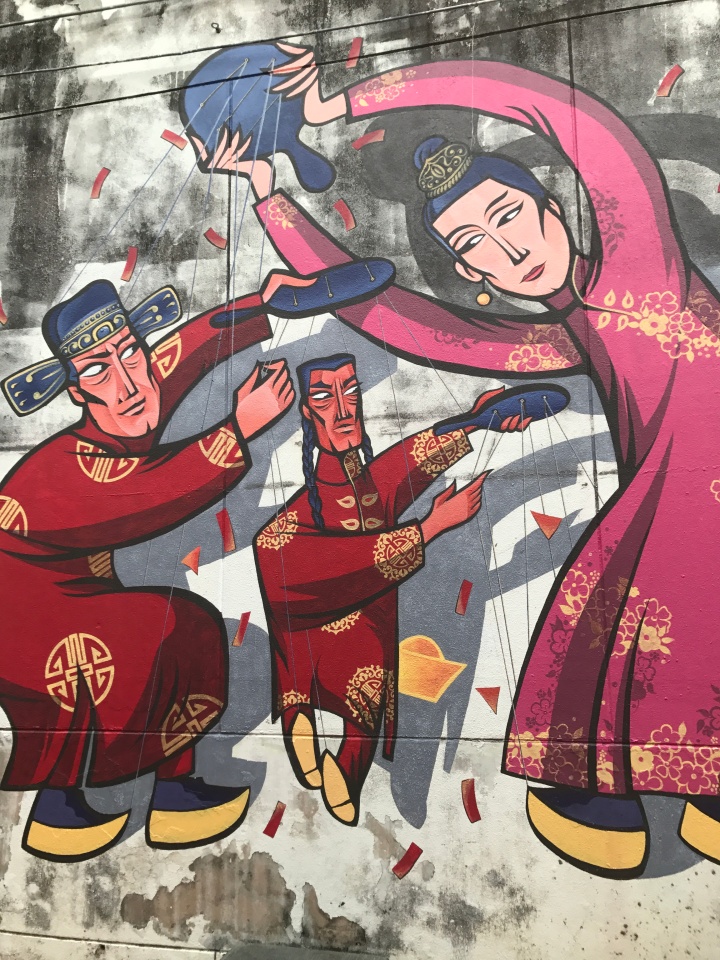 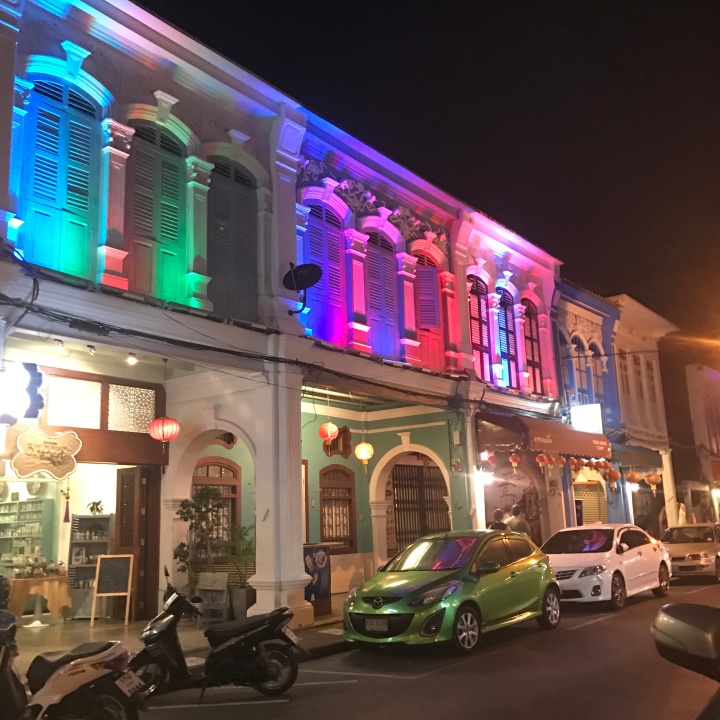 Yet there were other things that also caught our attention, like  B Cat Cafe and Club No. 43. These are my top 2 recommendations for Old Town Phuket: a) if you are a lover of cats (insert Elmyra Duff squeezing all the kitties) or B) you like a good stiff craft cocktail.

B Cat Cafe does require you to buy either a drink or dessert to enter, but this was an small price to pay in order to surround ourselves with as many cats as possible. How cute are these faces? 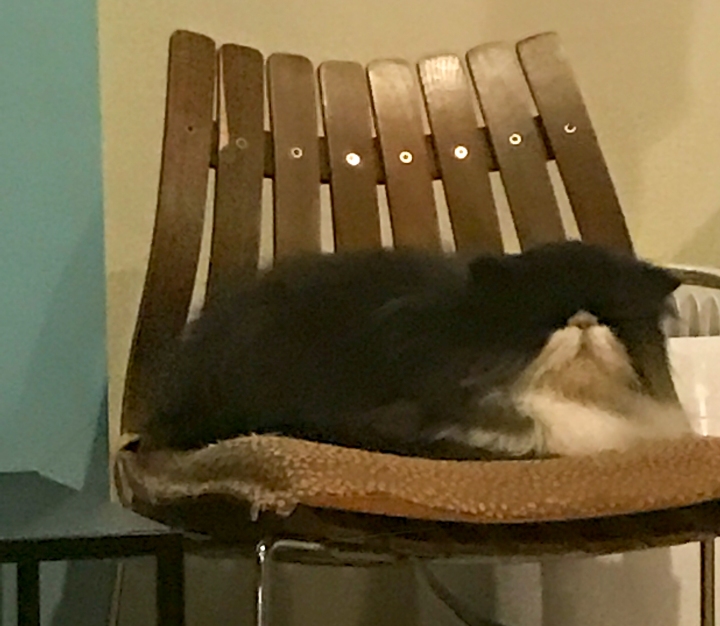 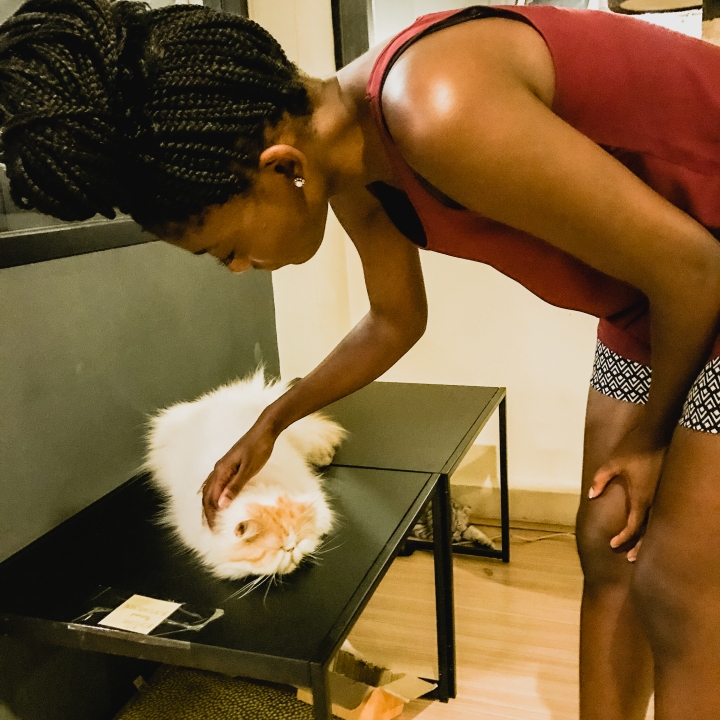 We happened to stumble upon Club No. 43 had a drink, left and got dinner, and enjoyed it so much that we came back. It is a small intimate bar that you might miss if you blink. The staff there was extremely friendly, attentive,  and well versed in mixology. Not only were the drinks unique and exotic, but it was like watching a science experiment in a bar. If you want a low key bar mixed with a little craft and class this is your spot.  It is the perfect place to unwind after a long day or just to catch up with some friends. 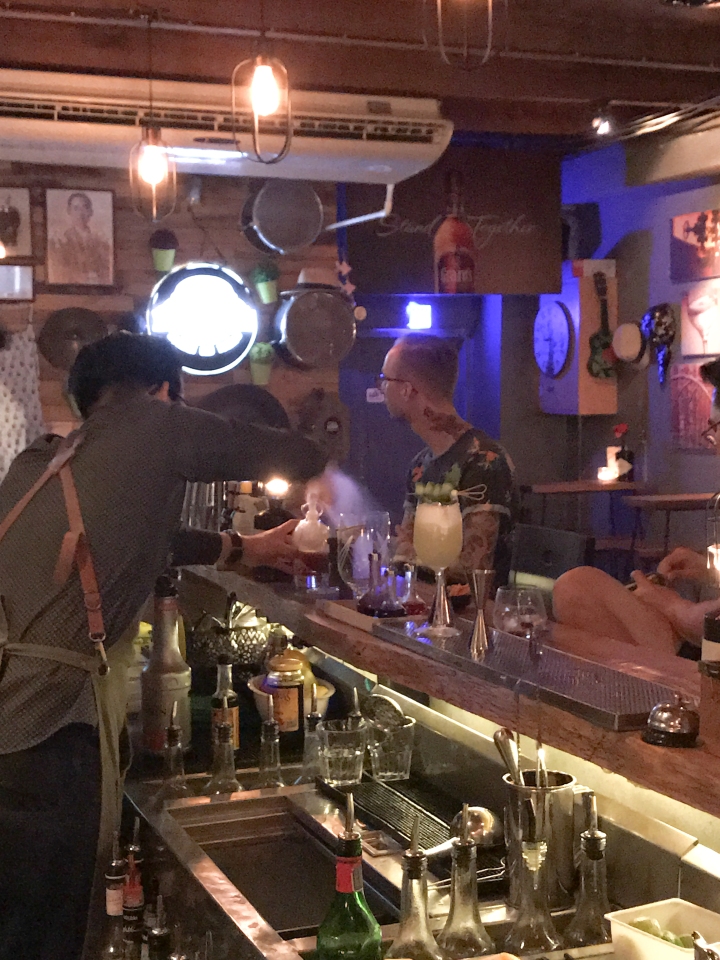 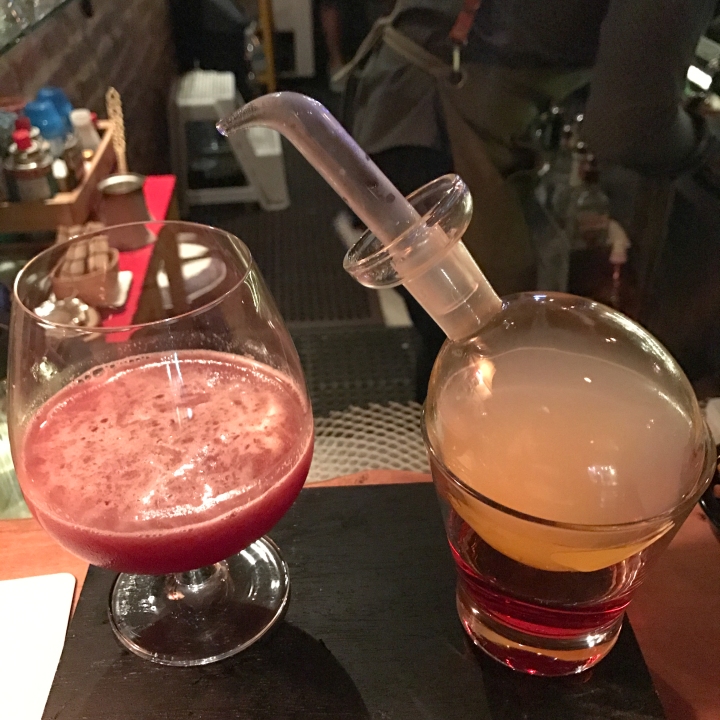 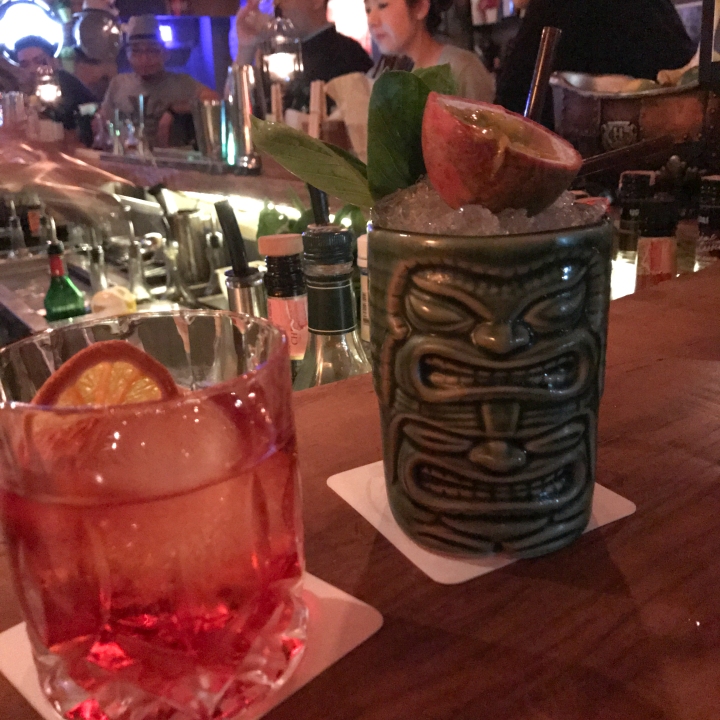 The greatest part of Phuket is that there is truly something for everyone whether you are looking for a full blown party or something a little more low key, looking to relax or looking for an excursion, you’ll be able to find it. Even better, you can do it all relatively expensively. Phuket is not shy of the tourism that it brings in and it manages it well, but there are still so many untapped and undisturbed locations that can easily lead you to a path of exploration and possibly some of the most incredible memories… if you have not been yet, put it on your list… Take a chance and peruse Phuket!