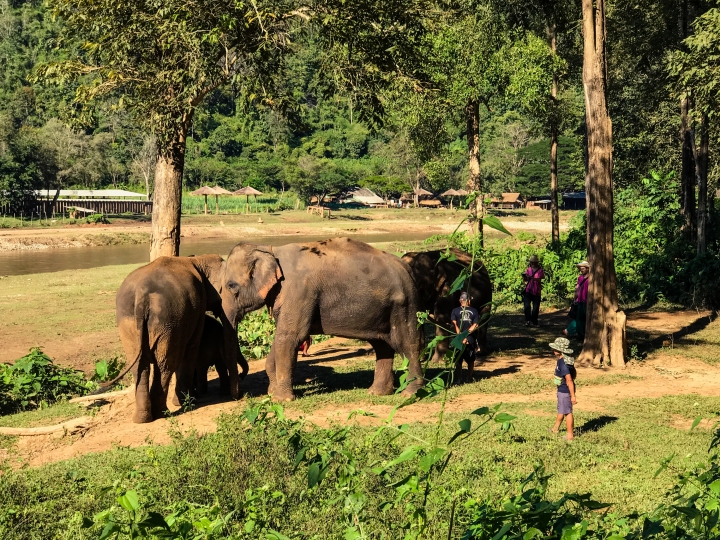 There were so many things that I absolutely had to do while in Chiang Mai. One of the many was visit an elephant camp. There are several of these throughout Thailand. The elephants who are cared for on these properties are often either unwanted, abused, or abandoned. Places like the Happy Elephant Home, where we visited, are known to give various tours in which you can spend a portion or a full day with the elephants and assist in caring for them. These elephants are truly cared for a loved.Side Note: I do have to warn you that we were warned by friends prior to our visit to Thailand to be careful about visiting sites claiming to have elephants. There are a number of places that offer to let you ride elephants and there are several ethical concerns over riding them. Although in the past it was very common for people to ride elephants, many people are moving away from the idea and focusing on the treatment and care of the elephants. I will admit that we did go on a different tour through a separate company in which we rode an elephant following our visit to the Happy Elephant Home and our sentiments towards it were definitely unfavorable. 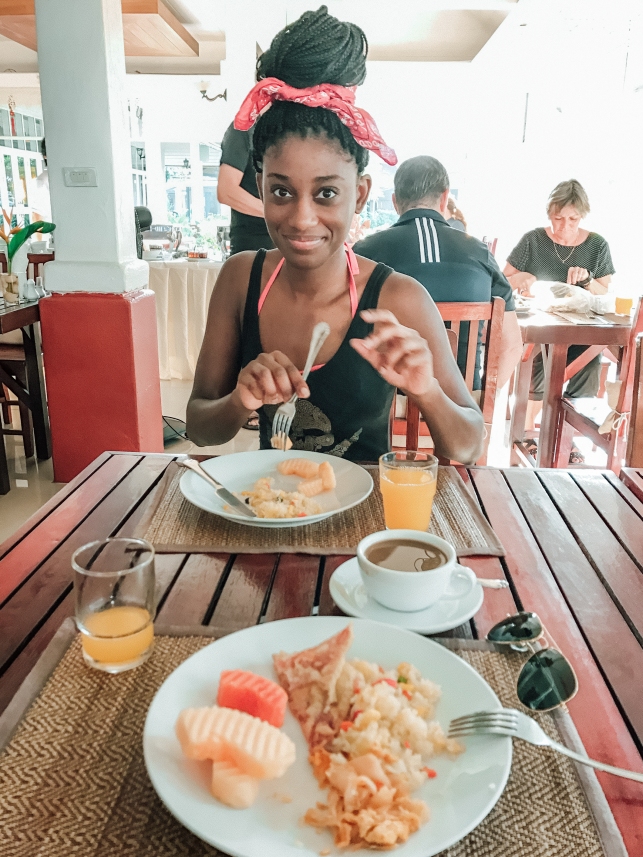 Our day at the Happy Elephant Home started with a well balance breakfast from our hotel. We were pumped and ready to go. A shuttle bus picked us up from the hotel shortly after we finished breakfast and we headed off to pick up a number of other travelers who were visiting the camp with us. After about an hour and a half drive out into the Thai Jungle, we made it to the Happy Elephant Camp where we were first greeted by a mother and baby elephant duo. I cannot recall the name of the mother elephant, but her son Milo was unforgettable. 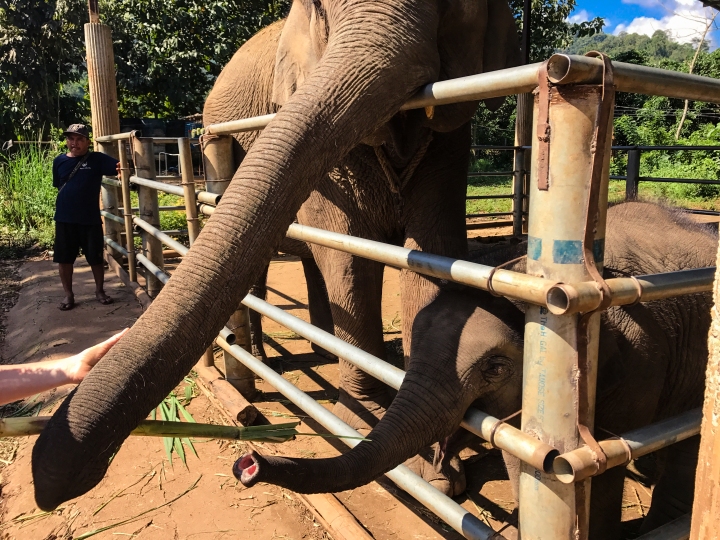 Unfortunately, upon our arrival we learned some interesting and slightly unpleasant facts about elephants. It turns out that it is not uncommon for baby elephants to eat fecal matter from their mother’s bums. The reasoning that we were fed was that it was high in nutrients. Ryan just so happened to not be paying attention this part of the conversation since he was fixing his shoes and too soon learned not to touch an elephant’s trunk unless you know where it has been as Milo reached out his trunk and Ryan went straight in for the trunk rub. The horror on his face was priceless as I caught him up to speed about what had all just witnessed. Thank God he has a wonderful wife who keeps sanitizing wipes on hand at all times and for a nearby sink.

After teaching us some fun facts about the elephants we would be caring for that day, we were given a few tips. Lesson 1, always speak when standing behind an elephant so that they were aware that you were behind them. That way accidents could be prevented. The one exception to that rule was Milo. We were warned that Milo just didn’t care. I’ll paint a fairly accurate picture of what the elephant handler and Milo’s relationship was like…Think Dave and Alvin from Alvin and the Chipmunks. Milo’s wild and free spirited behavior often provoked a call similar to Dave’s “Alvin..Alvin… ALVIN.”

The team from the Happy Elephant Home then introduced us to Milo’s grandmother who would also be spending the day with us. There are several elephants on this property and several caregivers. If I am not mistaken there were at least 2 other tour groups there and I believe a maximum of 12 people per group. Although that sounds like a lot of people per elephant, I assure you there was a ton of interaction to be had with the elephants amongst all of us. 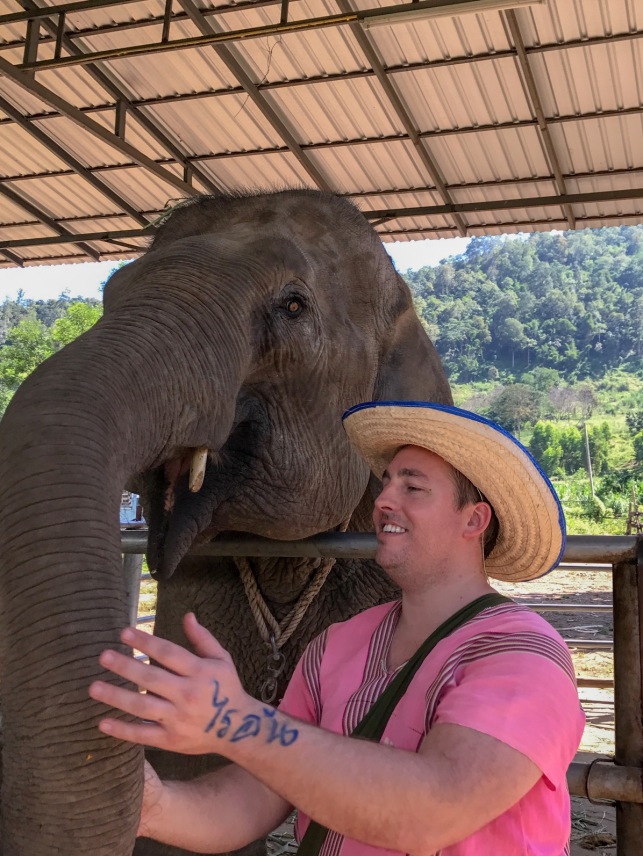 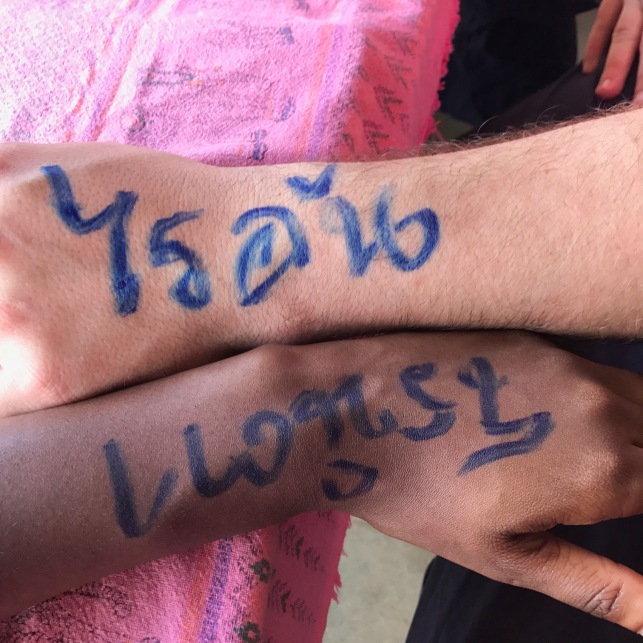 After feeding the elephants a few pieces of pumpkin so that we could get acclimated with the elephants and vice versa, the staff had us all change into clothing that the elephants were accustomed to… the bright pink ensemble you will see us sporting. All but one of the poor guys in our group were stuck sporting a same classy get up and boy were they all thrilled about it. The caregivers also took the opportunity to write our names on our hands in Thai which we thought was pretty cool.

The staff prepared red curry, rice, and fruit for everyone for lunch and after we wrapped lunch up, we were on our way. It was time to prepare lunch for the elephants: pumpkin and sugar cane. However, we were getting the full caregiver experience. Everyone was handed a machete, whole pumpkin and full sugar cane and to prepare the food that the elephants were to be fed. Fortunately, Ryan’s southern roots rang louder than ever and he was thrilled to be using a machete. With a piece of sugar cane hanging from his mouth, my Southern Charmer, hacked away at the food and was done in no time. We stuffed our bags with food and were told to ration it along the way as it would help lead the elephants down to the river where they could play in the water and we could bathe them. 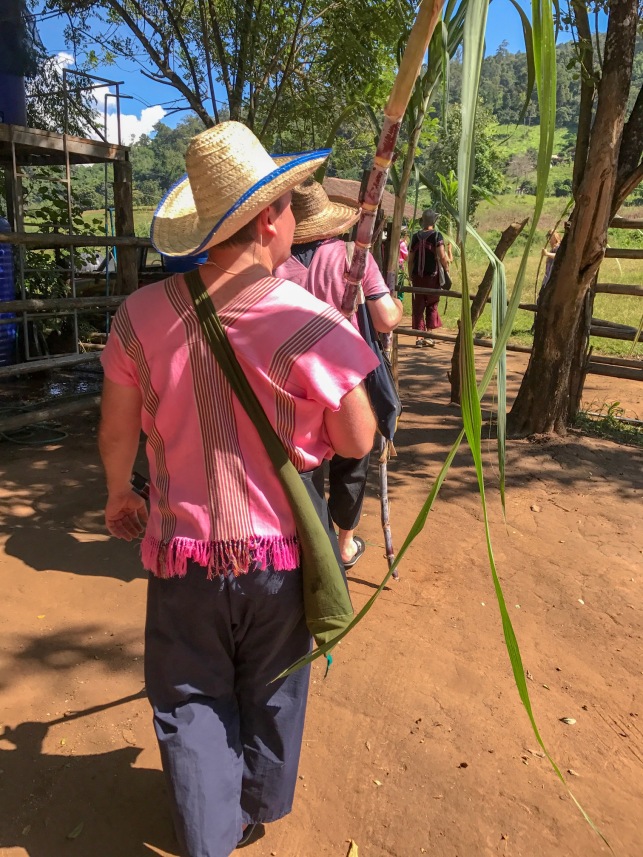 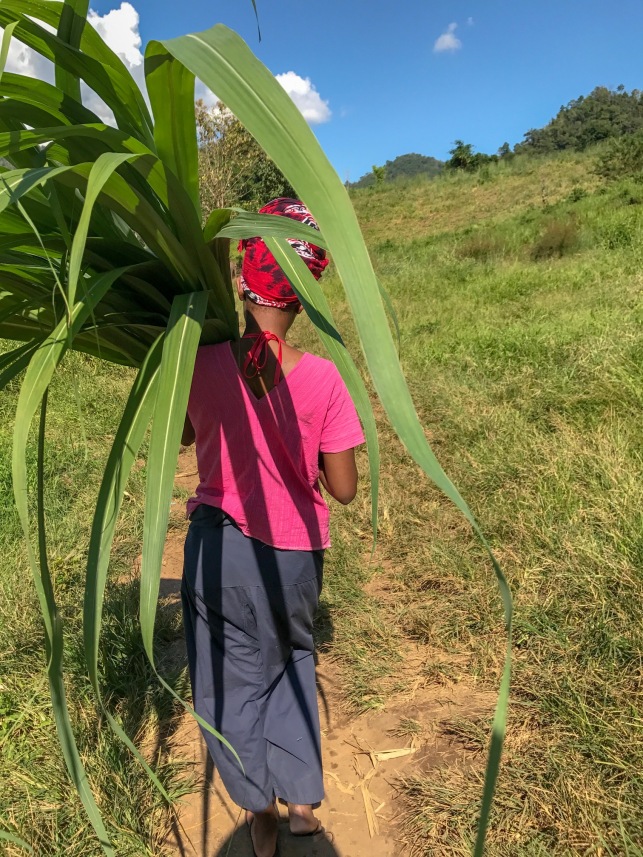 We joined another team and began our hike down to the river. We stopped occasionally to feed the elephants along the way and it was at that moment that I learned to never turn your back on a hungry elephant. Ryan tried to capture me enjoying the moment for his vlog and instead captured me getting yanked around by and elephant who had managed to creep up about 10 feet behind me and take her choice of sugar cane from the stack I was carrying. Check out the Chiang Mai video to get a closer look.

We were warned several times by one of the guides to watch out for Milo, who I believe was just a year old at the time. He was extremely playful and mischievous, much like any other one year old, and didn’t know that power of his own strength. For that very reason, Milo had to wear a bell so that everyone could hear him coming. I found myself becoming very close friends with a Russian girl who often ran with me or tried to hide behind or with me whenever we heard Milo coming. 9/10 times Milo was charging the crowd or slinging his trunk in an attempt to play. Ryan absolutely loved it, but I was not interested in getting knocked over or my toes stepped on by an elephant that was easily 4-5 times my weight. 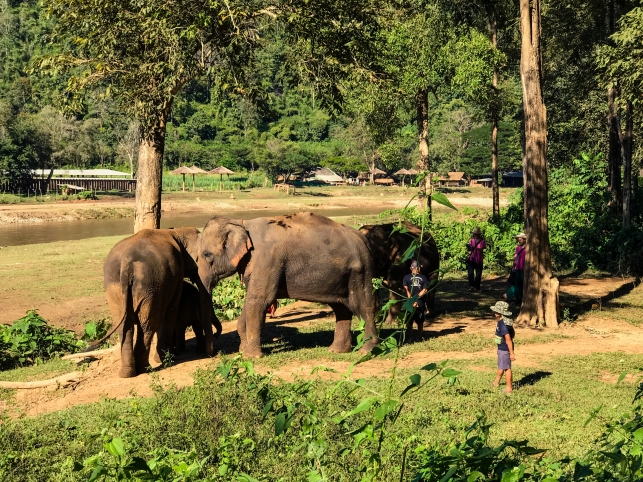 Once we made it to the river, we were able to feed the elephants the last of the treats we had. As we were all crowded around the elephants and having a good time, a Jeep from a neighboring camp came flying down the hill right beside our group. The maternal instincts of the 3 female elephants in our group quickly set in and they instantly charged towards  Milo forming a triangle around him, and protecting him from harm’s way. Their trumpeting as they rushed to his side was majestic, but many of us had forgetten that we were all within feet of these once gentle giants and there was no way to anticipate the sudden change in their temperaments or reactions. No one was injured. After a few moments, the 3 larger elephants relaxed and little Milo was back to his usual self charging the crowd… bell jingling followed by screams and running.

The elephants were finally led into the water and we all slowly inched in behind them. Fortunately, we were upstream. The elephants laid in the water, basking in the sun as we splashed and rubbed them down. Milo took turns diving into the water while his mother and grandmother kept a close watch.

When the elephants had had enough, they climbed out and we all headed back to camp to wrap up our day. 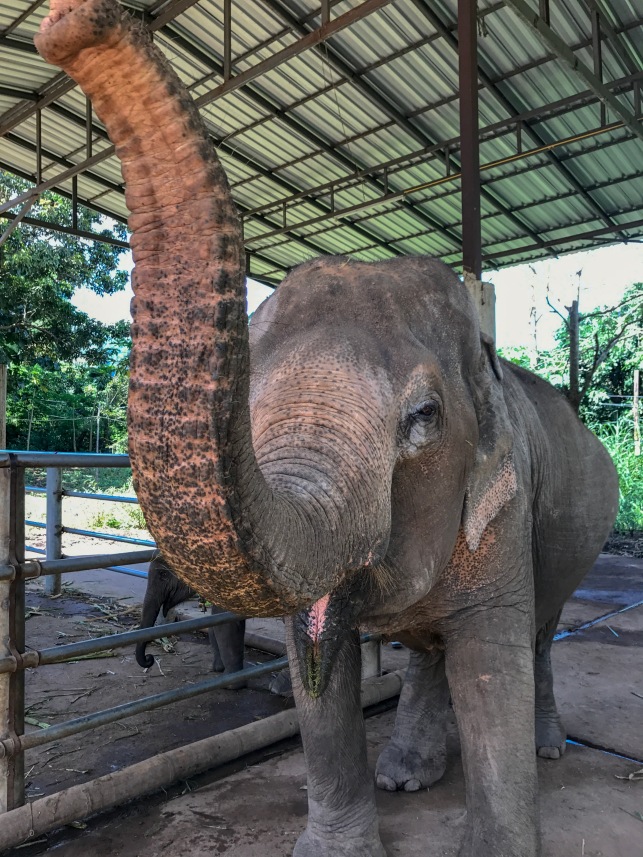 I cannot express in enough words what a wonderful experience this was. When I first arrived I was terrified of how large and powerful the elephants were in comparison to us. Even reaching up to feed one for the first time put me in complete panic overdrive. The strangest part of it all was that I chose this venture, but by the end of it I was absolutely in love. 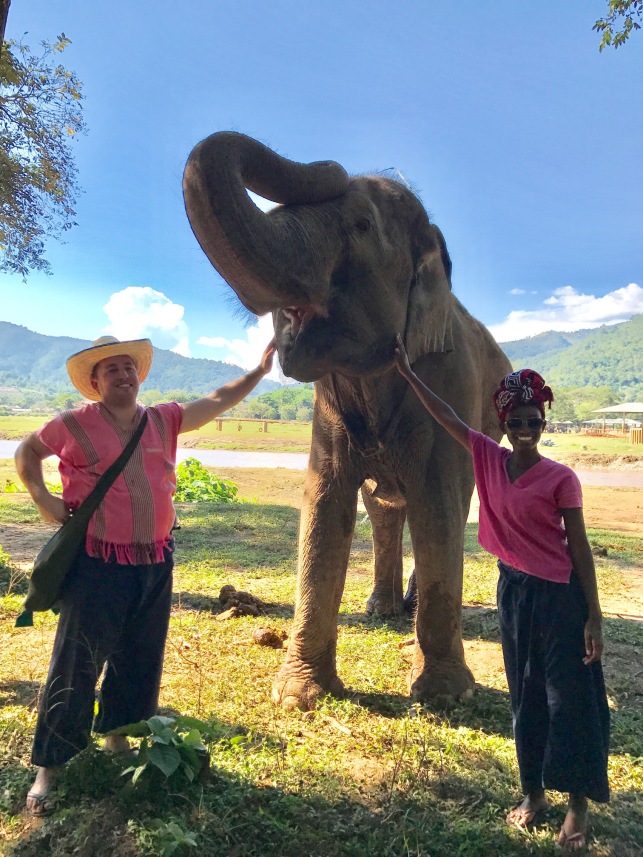 You watch episode after episode of Planet Earth and get an idea of how sweet, gentle and caring elephants are, but nothing can compare to actually being in the presence of one without barriers. They are truly loving animals and in some ways are more like humans than you would expect. Every herd has a matriarch figure who takes control and leads her herd to safety. She accounts for her herd and often leaves no one behind. She is the strength and glue that holds her herd together. Reflecting on that now, brings so many revelations about the women in my family. There’s so much power and strength to be found in them.

So if you are visiting Thailand at any point, be sure to visit one of their elephant camps. You will want to book months in advance to secure your spot as reservations go quickly at most of the camps. The money you pay to spend the day with the elephants helps theses charities continue to provide homes with love and care to so many elephants that deserve it.